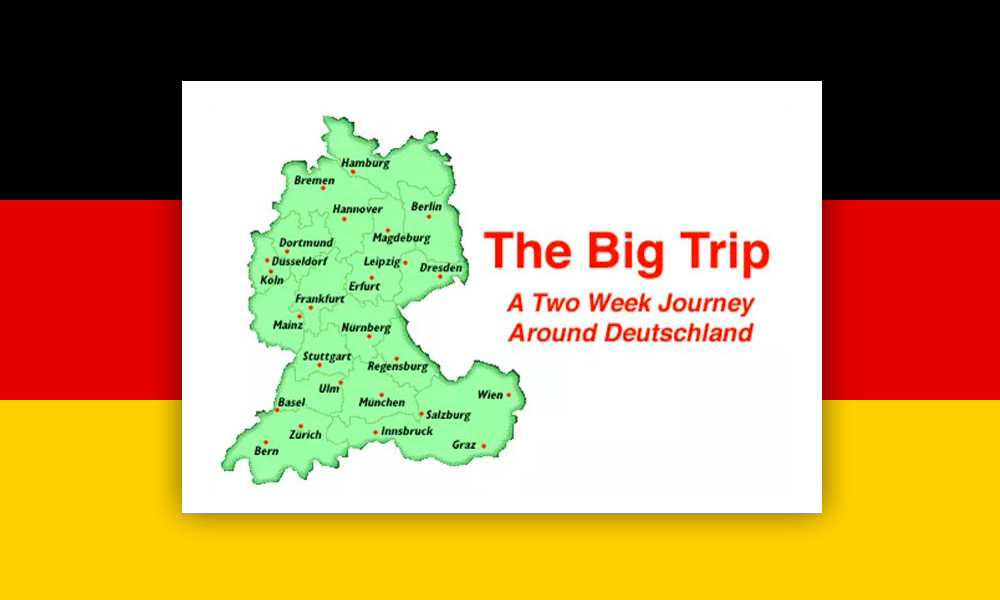 It was the summer of 1997, three years after my Mom had died and two years after the internet had moved out of academia and became available to anyone who wanted to use it.

My Dad and I went to Germany for two weeks in August and the trip was one of the most profound experiences of my life for two reasons:

1) It was the only significant trip my Dad and I ever took together and he passed away two years ago in March of 2012. This trip was our only long 'Dad & Son Adventure' and the trip means more to me today than it ever has before, and the memories of it grow ever sweeter with the passage of time.

2) I had my "big internet awakening" that set me on a path for the rest of my career and changed everything for me.

OUR DAD & SON ADVENTURE TO GERMANY 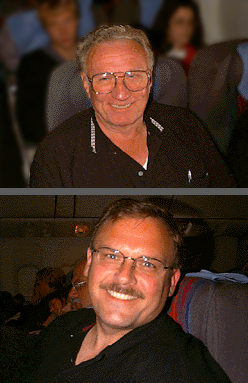 My Dad and I on the flight to Frankfurt, Germany.

Earlier in 1997, I'd proposed to my Dad that he and I go on a "Dad & Son Adventure" to Germany. Besides having fun together and taking his mind off of Mom's passing, one goal was to find the little town of Mehren (here's a map), since my great-great grandparents, Johann and Suzanna, had emigrated from there in 1854.

In fact, Dad was so incredibly pleased with what we discovered, he glanced over at me at dinner that evening and said, "We can go home now."

"Oh no," I thought and said, "Dad, are you sad or was this not a good thing or something?" He paused and with a growing grin on his face said, "No, this was exactly what I wanted to accomplish for this entire trip!" It was pretty clear that he was quite emotional about what we'd discovered, it hadn't quite sunk in yet, and he was actually just delighted. Phew. 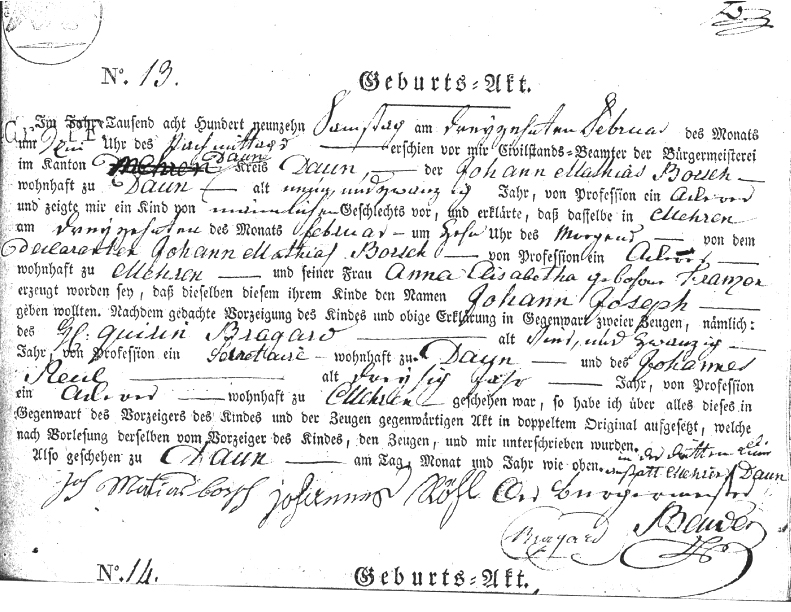 Besides trying to find these genealogical gems and explore the town of Mehren, I just wanted a good experience with my Dad while exploring Germany overall and the trip was absolutely phenomenal. I am so glad I didn't wait, which would have been easy to do since I was busy at the time, since if I'd put the trip off even one year it is likely we never would have taken it.

We did a complete circle tour of the country from Frankfurt to Berlin. Down the old East German side (only open then for 8 years after the Berlin Wall fell). We toured castles, churches, towns, museums, an automobile museum, and much more.

But my unexpected, big internet awakening was about to unfold.

Having spent a chunk of my career in interactive media and computer based training (Pioneer New Media in the interactive laserdisc group; Authorware as director of sales in 1989; Apple) and being a heavy user of ISDN (at a speedy 128kbps!), Gopher and email in the early Nineties, I was pretty delighted when the World Wide Web hit my radar screen in 1995.

That was the year I first downloaded the first commercially available web browser, Mosaic, and what gave me the idea of making my own "web pages" for each day of our trip to Germany. It's a frame-based HTML 'site' so one can click on the left navigation and the relevant web pages loads in the right frame.

Since my kids were little at the time and I would be gone for two weeks during this trip with Dad, I decided I'd use my free web space at Compuserve to try to build web pages and upload them to the internet so my wife and kids could follow along. 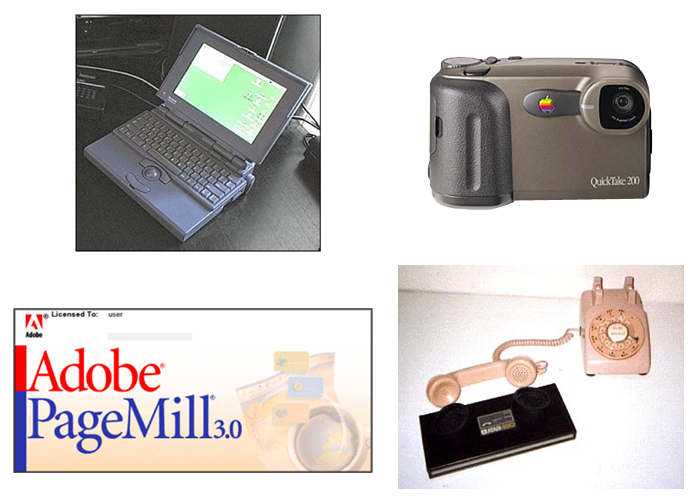 Here is the gear I took on the trip to build “web pages” for the website journal I made for my wife and kids. Clockwise from upper left: Macintosh Powerbook; Apple Quicktake digital camera; an acoustic coupler modem to place a handset in so I could connect to Compuserve; Adobe Pagemill software.

I took along my Macintosh Powerbook 150, an Apple Quicktake digital camera, an acoustic coupler modem, a copy of Adobe PageMill and my Compuserve account. As I mentioned, my plan was to chronicle our big trip for my kids, but ended up with extended family, friends and others logging on to my "web pages" (I didn't even call it a "website" yet) to view the trip too.

As you look at it with today's web browsers, fast internet connections and powerful devices, keep in mind this was 1997 and hardly anyone knew much about building websites or even HTML pages. In fact, the 1200 baud, acoustic coupler modem I took along transferred data at a theoretical speed of 1,200 bits per second (that is THOUSANDS of bits per second). To put that in to context for you, 2015's 4G, LTE mobile networks upload data at speeds of between 2 and 5 MILLION bits per second.

Also, the writing might seem a bit sophomoric or goofy, but keep in mind my daughter was 9 and son 2.5 at the time, and they were the target audience.

Go to The Big Trip to Germany

THIS TRIP WAS LIFE-CHANGING FOR ME


This little web page publishing adventure would turn out to be a powerful, life-changing experience for me.

It happened one evening in a way that I didn't expect, couldn't stop thinking about during the remaining 12 days of the trip, and that experience set me on a course for the rest of my career. 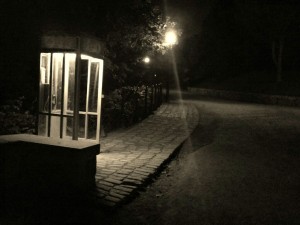 Standing in a Mehren phone booth one night ready to send the web pages I'd built for the day, I held in my hands a Deutsche Telecom card, my Powerbook and the acoustic coupler modem. It was a very frustrating getting (and staying!) connected to Compuserve.

At the time, Deutsche Telecom had a ‘tone’ pulse on the phone line as this would act as a ‘counter’ to measure the time the line was open so a deduction could be made from my card. The problem? The damn pulse would periodically disconnect my modem connection and it would make me want to throw my computer through the glass and kick the snot out of the phone booth.

But here's what happened that was unexpected after I successfully uploaded my pages for the day: I stepped outside and took a deep breath and looked up at the beautiful, star-filled night sky. I was suddenly overcome with an instant awareness that, "This internet thing is going to change EVERYTHING!"

I realized that no longer would people have to finish their multimedia or interactive content and WAIT MONTHS to send their stuff to a CD-ROM replication facility, get the CDs back, package them up and send them out. Same thing with magazines and newspapers, though at the time I couldn't imagine what would happen to the publishing, TV or other media industries (see State of the News Media 2014 - PDF).

When I had the deep realization that I, some schneeb with a laptop, camera, modem and some webpage-maker software, could send HTML over the wires to an internet-connected server and have it be instantly available to anyone, anywhere in the world with a connection, there would be no going back to the old ways of doing things. (I know that my "Aha!" seems quite obvious today, but in 1997 virtually everyone I knew thought it was incredibly cool that I was making these pages that they could see online).

That realization is what led me to pursue startups in the internet space. I connected with several friends but never found one worthy of quitting Apple for so I continued my search for a strategic vendor of internet software.

In late 1999 I found one: Vignette. After two interviews I received an offer to join this fastest growing software company in history and one that every major organization was buzzing about. It was an incredible ride but alas, the fast-moving internet space meant numerous rivals appeared and Vignette lost its mojo and was acquired in 2008 (I'd left in 2004 for Lawson Software).

Everything I've done since that phone booth realization has been centered around the internet.

REFLECTING NOW ON THAT TRIP


All in all it was a fun and interesting trip made all the more so by this unique online diary I kept during those two weeks. As I think about that experience vs. the type I have today (Wifi high speed connections, lots of ‘net tools, blogging software, film-like digital pictures, etc.) I treasure having that experience with the new internet…but being on and sharing the trip with my Dad, uncovering family connections, and being with him on the trip was an experience I’ll not have again and one I will treasure forever.

Go to The Big Trip to Germany