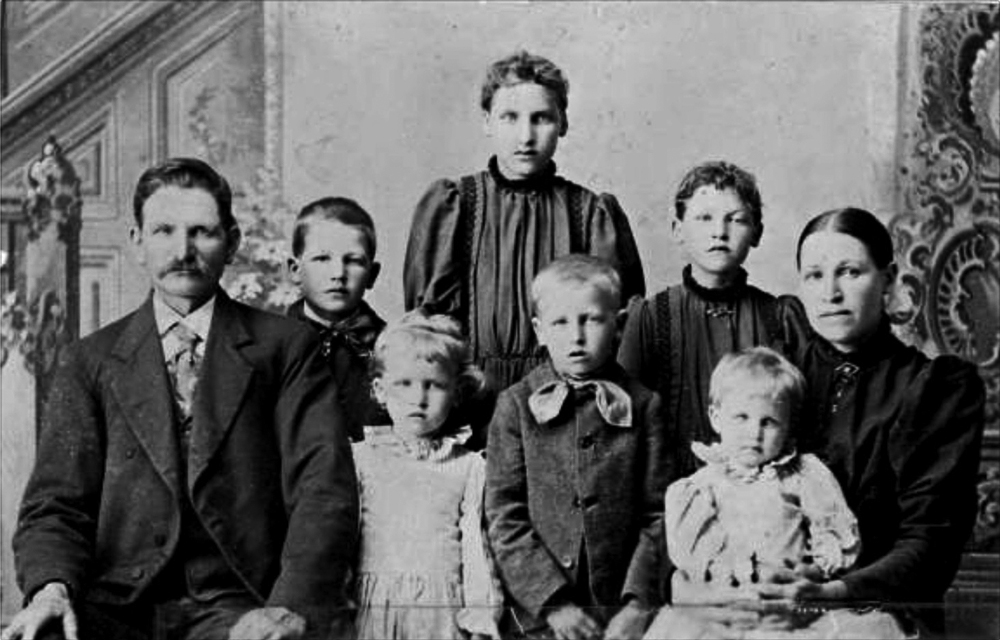 Below are two family member write-ups about the Peder C. and Mathea P. Wolla family. Peder’s wife was Mathea P. Olsdatter Fallet and they emigrated to America from Norway. Peder and Mathea are my maternal great-great grandparents.

Dad and Mother and their seven children came from Stange Hedemarken, Norway to the U.S.A. in June 1887 and settled on a farm near Benson. Dad was a baker in Norway so he baked many fancy wedding cakes for all the weddings in our own neighborhood in Minnesota as well as for most of his children. All married except brother Gust.

Crop failure in the Benson area in Minnesota prompted our family to go to North Dakota in search of free land for members of our family, as the area now known as West Bank had just been opened up for home-steading. Our family and six of our neighbors in Minnesota and their families immigrated via seven freight cars to Tioga in October 1902. Tioga was a new area just opened for homesteading that spring. We were some of the first settlers there. The freight cars and the men that came with them arrived in Tioga on the morning of October 21, 1902, after being on the road almost a week. There was no Tioga as yet, just the section house and the first store was just being built.

Dad, Mother, Petra, Karen, and I (Inga) arrived in Tioga by train on the eve of October 21, 1902. Sister Anne remained in Benson for a time as she was working there but came out later. It took us almost 24 hours to come from Benson at that time. The men had already unloaded some of the freight cars and since there was no place for anyone to sleep they brought the bedding into one of the freight cars and had the beds ready for us when we got there. How good we all slept, didn’t even hear the trains go by during the night. It was quite an experience, especially for us kids, and I remember it as if it happened yesterday!

The next day Mother and Petra cooked for all the men (while they were unloading the cars, etc.) on a kerosene stove down in the ditch along the track where the elevators now stand. They had brought foods of all kinds with them being there was no store in Tioga yet and it was twelve miles to both Ray and White Earth. That evening Mother, Dad, Petra, Karen and I drove out to our new home in a single buggy. How the coyotes welcomed us after dark with their howling. They were so plentiful at that time.

Dad proved a claim of 160 acres and eight of the children filed claims in this same area and remained there. Life in the community in the early day s was very simple. There were no radios or telephones. There were no books, magazines, or newspapers except one news-paper from Norway. For entertainment, neighbors visited one another and occasionally there would be a dance in one of the homes with local talent providing the music as many of them played a violin or accordion.

There were no schools for five years after arriving here so the children were too old to go back to school then. Only the two youngest of a family of ten children had any schooling and that was in Minnesota before they moved. A church was built by the neighborhood about five years after our arrival here. One pastor took care of five churches in this general area.

There was no traveling done at that time except to doctors. The nearest doctor was twelve miles away. Two of the children had to be taken to Minot for medical attention several times, a distance of 90 miles. There were no drug stores so home remedies were the cure of that day. All the children in our family were married long before the “dirty thirties” but all managed to survive drouth, sickness, and prairie fires. Only one from our family prof.ited from the oil boom.

The Wolla family left Oslo (Kristiania/ Christiania) on June 3, 1887, on the ship, “S/S Angelo”. The ship’s destination was Hull in England (about a 2-2 day trip), with a stop in Christiansand, Norway (4 hour layover).

They left Hull on a North Eastern Railway Company train bound for Liverpool, England and sailed from Liver.pool, on the ship, “S/S Sarmatian” on 9 June 9,1887 bound for Moville – Londonderry, Ireland and arriving in Quebec on June 18/20,1887.

Below is a PDF I put together for some family members that will provide much more information.

Use the toolbar at the bottom of the embedded PDF document to go from page to page, or you can download it here.