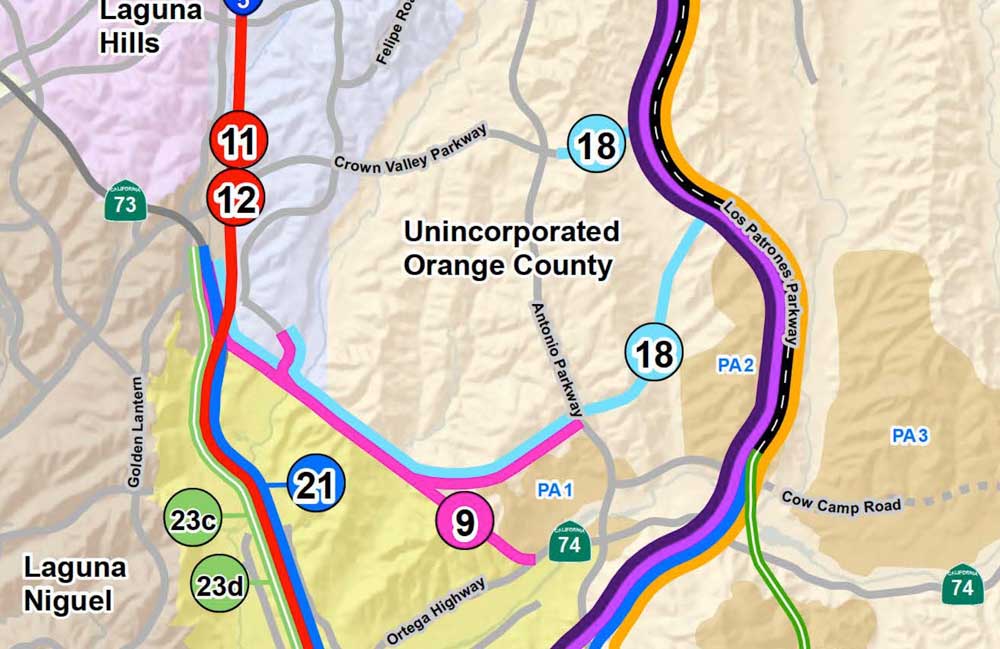 February 4, 2020: Below is the public comment I just submitted to the South County Traffic Relief Effort — before the February 7, 2020 deadline at 5pm PST — email address: scoping@SCTRE.org

Relatively new to California, I've only recently learned about an Orange County proposed roadway extension (alternative 18) for the South County Traffic Relief Effort (SCTRE) which would *significantly and negatively* impact the quality of life, and more specifically the health of residents, in Rancho Mission Viejo (RMV).

I OBJECT TO FURTHER CONSIDERATION OF ALTERNATIVE 18

One of the SCTRE alternatives proposed (and shown in the Map of Project Alternatives (PDF)) is #18 on the map. Crown Valley Parkway would cut-through the hills to connect with Los Patrones Parkway, but in my view the problem extension would be a multi-lane 241 pass-through that would run alongside the hills in the RMV Protected Habitat/Rural Area.

REASONS FOR OBJECTING TO ALTERNATIVE 18

My wife and I recently relocated from Minnesota to California and specifically bought a home in RMV for its planned layout but mainly for its natural beauty of the surrounding hillsides, minimal noise, and the cleanliness of the air surrounding the development. In fact, when our adult children and friends visit us from the Los Angeles area, they continually state to us that "It is so beautiful and you can breathe down here!" as one of the draws for visiting.

Having lived in Minnesota most of our adult lives, we are quite aware of the meteorlogical concept of 'inversion' and how it traps cold air and, most troubling for considering alternative 18, how it would trap exhaust fumes for long periods of time daily and at night.

The negative impact of lingering inversion-layer-contained air pollution would be considerable as it also would then be blown, during the majority of the year, directly in to Escencia. This Wikipedia article on inversion points this out in part:

"An inversion traps air pollution, such as smog, close to the ground. An inversion can also suppress convection by acting as a "cap"."

"Given the right conditions, the normal vertical temperature gradient is inverted such that the air is colder near the surface of the Earth. This can occur when, for example, a warmer, less-dense air mass moves over a cooler, denser air mass. This type of inversion occurs in the vicinity of warm fronts, and also in areas of oceanic upwelling such as along the California coast in the United States."

This air pollution problem is not a trivial impact. The American Lung Association published an article about the 700 studies that examined the effects of living near highways and air pollution on the health of children and adults.

It says in part,

"In January 2010, the Health Effects Institute published a major review of the evidence put together by a panel of expert scientists. The panel looked at over 700 studies from around the world, examining the health effects of traffic pollution. They concluded that traffic pollution causes asthma attacks in children, and may cause a wide range of other effects including: the onset of childhood asthma, impaired lung function, premature death and death from cardiovascular diseases and cardiovascular morbidity. The area most affected, they concluded, was roughly the band within 0.2 to 0.3 miles (300 to 500 meters) of the highway."

A large number of Escencia development homes, especially those with children, may not lie directly within that 300-500 meters, but with the nearly constant airflow from the ocean (with the infrequent exception of Santa Ana wind events) — as well as morning marine and morning/nighttime inversion layers — the impact may likely be as or more profound than living next to an interstate highway in a flat area with little inversion or marine layer issues.

Why is a protected habitat area, lost forever if alternative 18 is chosen, under consideration at all?

In all marketing materials for Rancho Mission Viejo, as well as all conversations with builders and Rancho Mission Viejo Master Maintenance Corporation personnel before purchasing our home, the attractiveness of having the RMV Protected Habitat/Rural Area was ONE OF OUR KEY BUYING PROPOSITIONS to purchase a home in RMV, especially since we could be virtually guaranteed of experiencing lower levels of vehicular exhaust and noise pollution.

It was only after buying that we received the RMV disclosure "Esencia_2_3_Contiguous_Area_Disclosure_Statement_8-18-17.pdf" (also available for download at ( https://stbo.us/rmv-protected ) which contains the following verbiage on page 2, number 3 (my emphasis in bold):

Even after that disclosure clause was discussed, we were still emphatically told by those multiple representatives that this area will be protected "in perpetuity." Apparently that is not the case as it is 'owned' by Orange County who can, in all likelihood, do whatever they deem necessary?

Here is a map of protected area in RMV that would be harmed, and resident's health compromised in the hundreds of Escencia homes nearby, should alternative 18 be chosen.

In the vibrant hilltop village of Esencia at the heart of Rancho Mission Viejo you’ll find neighborhoods for couples, families and adventurous empty-nesters. Outstanding amenities and awesome natural surroundings offering countless opportunities for new experiences. And an action-packed community calendar that delivers the good times all year long.