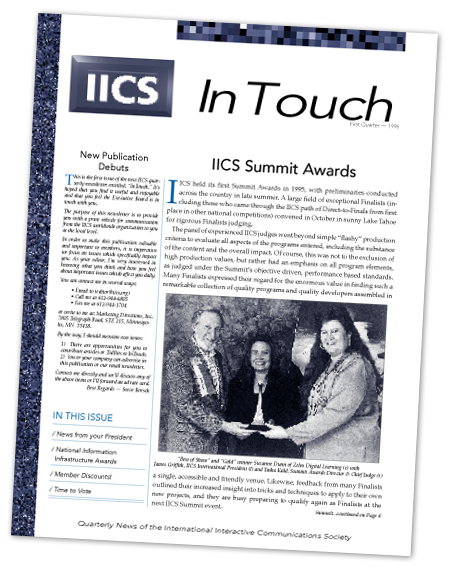 I found an old Pagemaker 6.5 layout file for the international newsletter I created in early 1996. Unfortunately the graphics and photos embedded within it are long gone—so those look fuzzy—but here is a PDF of it if you're interested in reading the copy.

The organization was deeply involved in interactivity, multimedia, and interactive videodisc (before computers could handle digital video, video, audio, images and interactivity was delivered by hooking up a laserdisc player to a computer). The group also focused on CD-ROM delivery of multimedia content as that, and other CD-based technologies, emerged. Unfortunately, and over the protestations from some of us who absolutely, positively believed this new "internet" thingy would make IICS a moot point, the leadership in the mid-1990s did NOT pivot the organization and embrace the internet. The group quickly plummeted from a 3,200 member organization to zero in three years. From Wikipedia about IICS:

The organization traces its roots to the days of interactive laserdisc production in the San Francisco Bay Area during the 1980s. Originally the society was proposed as a special interest group of the International Television Association (ITVA), now known as Media Communications Association – International (MCA-I), but the charter members decided to establish the society as an independent entity with different membership requirements for the new interactive and computer based communications. The charter members were composed of equipment vendors, independent producers, training professionals and members of Apple's IIe computer group, Sony's SMC-70 computer & interactive laser disc groups and Pioneer's interactive Laserdisc groups. 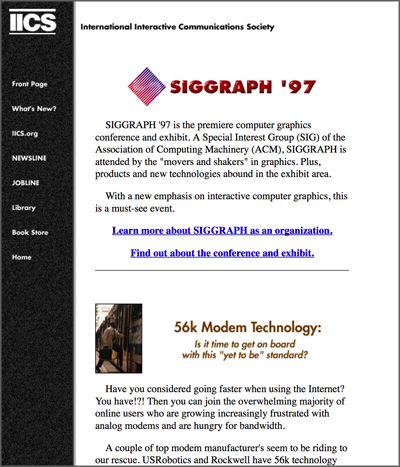 My time in the organization was fabulous. I met so many people with whom I remain friends with to this day. I ended up as president of the Minnesota chapter, publisher of the international newsletter and the directory, and even put together, what looks pretty cheesy now, this website. Most importantly, my involvement in this group helped me 'see' what a major impact the internet would have on the world when it arrived commercially in 1995 and what led me to join the fastest growing software company in the world, the content management software firm Vignette, in late 1999. It was the pivotal event for me that set the tone for my work in all the days that have followed.

In 1997, while doing the newsletter and other communication tasks, I offered to create the website. A few of us, including Jeannine Parker and executive director Debra Palm, both agreed strongly that the organization needed to embrace this new thing called "the Internet." Unfortunately many others didn't, we were out-voted, and IICS went in to the history books.